ICUMSA 45 is high quality food grade sugar that can be found in supermarkets, eateries,and homes around the developed world. This highly refined sugar is in large demand for its sparkling white color, it’s purity,and its safety,as it is the most decontaminated and bacteria free sugar that once can purchase.

ICUMSA 45 is a rating set out by the International Commission For Uniform Methods Of Sugar Analysis,and is awarded only after sugar demonstrates certain properties in a standardized test. The system was developed so that international traders in different countries had a meaningful way of describing sugar when selling it.

How Are ICUMSA Ratings Awarded?

The equipment used to carry out the test is called a colorimeter. This is a device that measures how many wavelengths of light a substance absorbs. Objects or substances that are white in color absorb very little light of any wavelength,and this is what makes them appear white to the human eye.

To understand this better, one needs to understand how it is that our perception of color works. The light from the sun is of mixed wavelengths,and the objects around us are made of various substances that absorb some of these wavelengths,and reflect others back to us. Wavelength corresponds to color when perceived by humans. Take a leaf from a tree for example. It appears green,but only because the leaf absorbs the other wavelengths of light and reflects the “green” ones (or rather, the ones that are interpreted by the human eye as being green) back into the atmosphere. If they happen to hit a human eye,then that eye perceives the leaf as being green.

The colorimeter used in ICUMSA testing is a tristimulus colorimeter that tests the sample along the spectrum of visible light. If the sugar is dark, or raw,then it gives a high reading,sometimes up into the thousands. Highly refined sugar gives a reading of ICUMSA 45.

ICUMSA 45 sugar is created from one of two sources, sugar cane, or sugar beet. The resulting quality of the sugar is not affected based on the original source of the sugar, so in most cases it is a moot point as to whether ICUMSA 45 was created from beet or cane. If one has a reason to stipulate that sugar must be sourced from either beet or cane,there are certain tests that can be done to ascertain which plant was the sugar source. In most cases this is unnecessary.

The processing methods used to extract the sugar from each are slightly different however. Cane must be crushed and milled in order to extract the sugar juice,which emerges from the cane in a somewhat contaminated state, containing soil residue, other soluble compounds, and even small pieces of cane.

Beets, on the other hand, are thinly sliced and placed in a diffuser where hot water passes over them and leeches away the sugar content,with a few soluble contaminants and small pieces of beet, which are removed in later processing stages.

The juice extracted from the beet or cane must now be treated to remove impurities and to extract the sucrose in it. The first stage of this process is called “affination” and involves combining the raw juice with heavy sugar syrup to create a mix called a magma. The magma is then spun in a centrifugal device which removes much of the water and leaves a substance with a high sugar content behind. 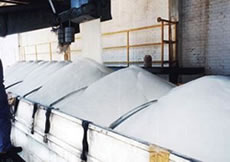 The sugar substance left behind in the centrifugal device is then washed and dissolved into a solution that is around fifty percent liquid and fifty percent sugar. There are also a great deal of contaminants and color in the sugar, as although it has been separated out, centrifugal spinning alone cannot remove the smaller contaminants in the sugar.